At first, I was so excited to write about what inspired my tattoos. Then I realized that this would require me to actually use my brain which has been on snooze since I finished exams. Stixx’s blog is very fancy so forgive me if this isn’t the best piece you’ve ever read.

So how did this tale begin? Well,it all started one brisk summer evening – it was a Tuesday – the sun had just set…no, I’m kidding. The first tattoo I ever got was partially because I thought I was grown up and decided that I wanted to be a rebel. I fell in love with piercings and a love for tattoos soon followed. The first tat I got was a verse my Dad shared with me in hopes that I would live by the word .Psalms 119:105 “Thy word is a lamp unto my feet and a light unto my path.” I got it on my foot because I thought I was so ridiculously clever. Despite the foot supposedly being one of the worst places to get a tattoo, the pain was addictive and as my first was being finished, my mind was already working on what I wanted next.

The second one I got was originally supposed to be my first. My brothers and I all have this tattoo. “Family First” is pretty self-explanatory. Not to sound like a ‘fagasaourus’ but my brothers are like my best friends. Of course when we were younger, we were psychotic. I mean, not quite ‘bath salts eat-your-roomate-for-a-light-snack’ psychotic, but we fought like siblings do. The older we get, the closer we get. It was also in honor of my parents who migrated from Guyana and through their hard work and selflessness gave us the best life possible. They always put my brothers and I first, I can only hope to be half as good a parent to my children; unless I remain a cat lady, then I’ll be the best psycho cat lady on the block.

The third and fourth tattoos I got are kind of a two for one combo. I literally have had verbal diarrhea for most of my life so I’ll try to wrap this up and keep it short and sweet. Through my highschool Turner Fenton (Brampton! Stand upppp!!!…No? Ok.), I went to Tanzania in 2008 and it was life changing. Memories fade but the lessons I learned there never will. The kids I met there were so incredibly happy despite their circumstances. Everyone just seemed content and willing to share whatever they had. It was refreshingly the polar opposite of the greedy, money-hungry mentality that is undeniably present in Western society. I went to an orphanage called Shiloam (Peace) and met a little girl named Anna who, despite her battle with Aids, was so loving. She didn’t deserve the life she had but her happiness was contagious. The ribbon I got was in honor of her and others like her who showed me that there is so much more to life. It’s also in honor of my Aunt in Brooklyn who my mother used to ship me to every summer. Despite her battle with cancer, she recently travelled to Nigeria and used her skills as a nurse to help make a difference as well. Carpe Diem encompasses what I learned on my trip. Seize the day, take every opportunity that is presented to you and live your life to the fullest. I hope to become a teacher and use that to eventually travel overseas and help build, teach and change lives. 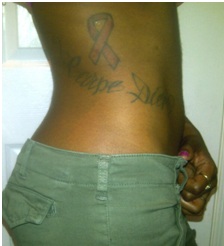 That’s all folks. Thank you Stixx for the opportunity. Thank YOU if actually made it this far and read the whole thing. Live long and prosper. Read more, change the world. I’m cat the lady – Me-owww? I dunno man. (Insert something clever and catchy here) Toodles.