The Human race worries me sometimes, and the reason why it does it because of the increase of dependence on technology. We live in a world where it’s more common to meet someone online before you see them face to face, and where interacting with people without hearing a spoken word has also become common. Reading or typing words projected on a screen have become second nature, and it (in a way) has diminished the thought of what a ‘real’ conversation is, and even what a ‘real’ friendship is. Love works in complicated ways, and nowadays you can fall in love with someone whom you’ve never even met (MTV made a show out of this called ‘Catfish’), and with computers becoming more and more mobile and user friendly by simpler interfaces adjusting to human patterns, what if you combined a human and a computer as 1 and you could fall in love with that person? Weird, right? Well Spike Jonze decided to take that idea and put it into a movie. 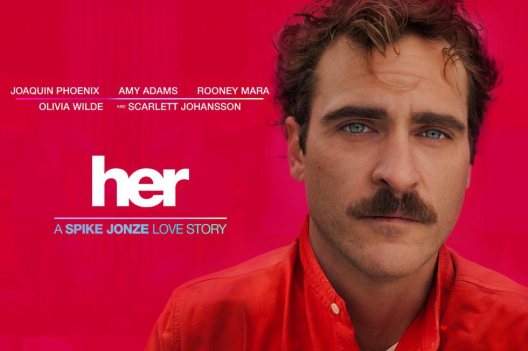 I look at movies like A.I: Artificial Intelligence and S1mone as a couple of movies that were ahead of their time in kind of foreshadowing the effects of technology when it came to human-robot relations. This movie took it to the next level where a divorced man needed help with his social life, and it’s his own doing that has him in a rut and lone state of mind, so it takes the likes of a DNA based super-powered Operating System to wake him up from his slumber, and get him to enjoy life again. This is a great story, but at the same time, it’s so weird that the fact that a human and simulation of a human can establish real feelings for each other is kind of weird; I’m not even going to lie. In a backhanded way, I think it’s a message to all people that no matter how much we get in tuned with technology and any other fabrication of carbon fibre & memory, it’s nothing like that human interaction.

Joaquin Phoenix & Scarlett Johansson made a great tandem together, and although you never see Scarlett on screen (since she’s the voice) they made for good chemistry, because you have Scarlett playing the joyous, free-spirited, and caring woman, and there’s Joaquin playing the socially awkward introvert who was looking for himself and found it in the last place imaginable. The personalities of the characters worked out well, and I could see why it got so much critical acclaim from all over the place. It’s funny, it’s sad, it’s touching, and it’s something a lot different than many other movies being shown this time around. Where there’s adaptations of books, and series of movies with sequels, and every other action movie looking like any other action movie, it’s good to see something original, but be a clear standout from the field. Given the fact that it’s in contention for Best Picture for the 2014 Oscars, I had to see what the hype was about, and it didn’t disappoint. But for now, this is my opinion, this is my review