The emphasis of bringing people together to meet and create a unified vibe is one that seems to be played off as cliché, although it’s exactly what happens every day online throughout various websites; you meet strangers, you discuss common topics, and often times, friendships build from that. Doing the same thing through face to face contact seems to be something of a lost art, so it took 2 brains, the duo of Heart & Soul (Alexandra Blaauw and Anika Mustafiz) to conjure up an idea that would hopefully bring people together to not only meet people, but to also open up themselves to complete strangers that would possibly spawn even more friendships to be created. 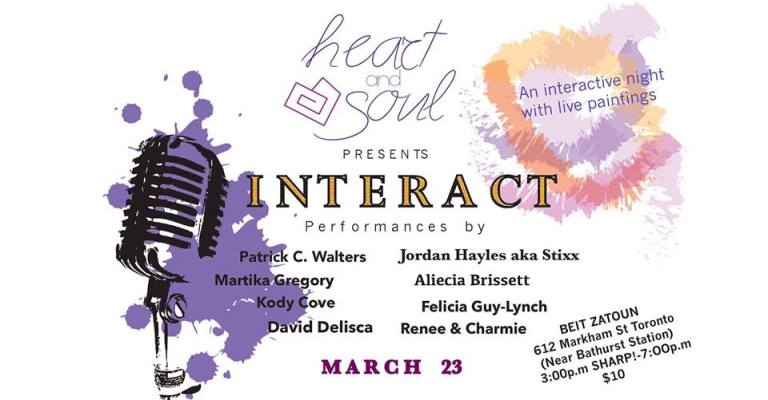 The event featured the combination of various art mediums and every day people to express themselves using their various talents, whether they sung, did spoken word, or even painted art while other things were going on. Music was played throughout, ice breaker activities, which included the most random and uncomfortable questions to answer, forced people to break out of their shells and step out of their comfort zones – it was truly entertaining. On a sunny, but cold, Sunday afternoon, there were a lot of things happening outside of their control that made the turn out seem improbable, but slowly & surely, the people filed in, the room seemed more comfy, and the level of interaction increased with every act that passed.

The group of people who performed at Interact ranged from spoken word artists like: Patrick Walters & David Delisca; to multitalented artist, Martika Gregory; independent author, poet, and musician, Felicia Guy-Lynch; and the great singing duo of Renee & Charmie. I also spoke, but sharing my story couldn’t compare to the talented people that followed. I didn’t feel like I had any impact per say, but that’s just me being critical of myself. It’s still a great honour that I was able to speak to people about how I’ve been able to do what I want on (essentially) my own terms, but the focus was about the people who were gathered in Bathurst & Bloor building right beside the legendary Honest Ed’s, to create a vibe that would house (who knows) future legends.

Alexa & Anika are good friends of mine whom I’ve known both for sporadically different lengths of time. I was with them when they initially told me about the idea, and to see them pull this off has been absolutely great, because it’s not easy putting on events, having high expectations, and then when everything seems to be going wrong and getting worse, you still pull it off. It’s a constant rollercoaster of emotions, and it’s safe to say that they pulled out quite alright. It was a great turn out of people who attended, and hopefully they make this a regular thing to bring out more people who would like to speak out on their endeavours for the future. Check out the full collection of pictures from the event, on Tumblr.

One thought on “Interact [Event Recap]”