I hope the days of Vampire and Zombie movies that originated from books go far, far away into the depths of the Hollywood abyss, because there needs to be room for better things to come across and grace the attention of a new wave of entertainment. The Hunger Games trilogy has already been carrying on a wave of quality entertainment (Catching Fire got me more into liking the trilogy), and where many people feel like adaptations from popular novel series’ are hit or miss (see: The Girl with the Dragon Tattoo as much as it was actually great), they generate a combination of movie goers and film lovers – and that’s not exactly something that’s new, but since the days of the Harry Potter saga, it’s what a lot of producers and studios are going for. Where the aforementioned, Potter, thrived, they left the bar so high, that many other book series (yes, Twilight), haven’t been able to raise the standard (it might be impossible), but the need for something different besides wizardry and fantasy love stories was in order. I was told that Divergent had kind of the same feel for Hunger Games, in terms of the books, and looking at the trailer, I kind of got that idea, but because of some songs on the soundtrack that I heard, I was drawn in to see what the hype was about. 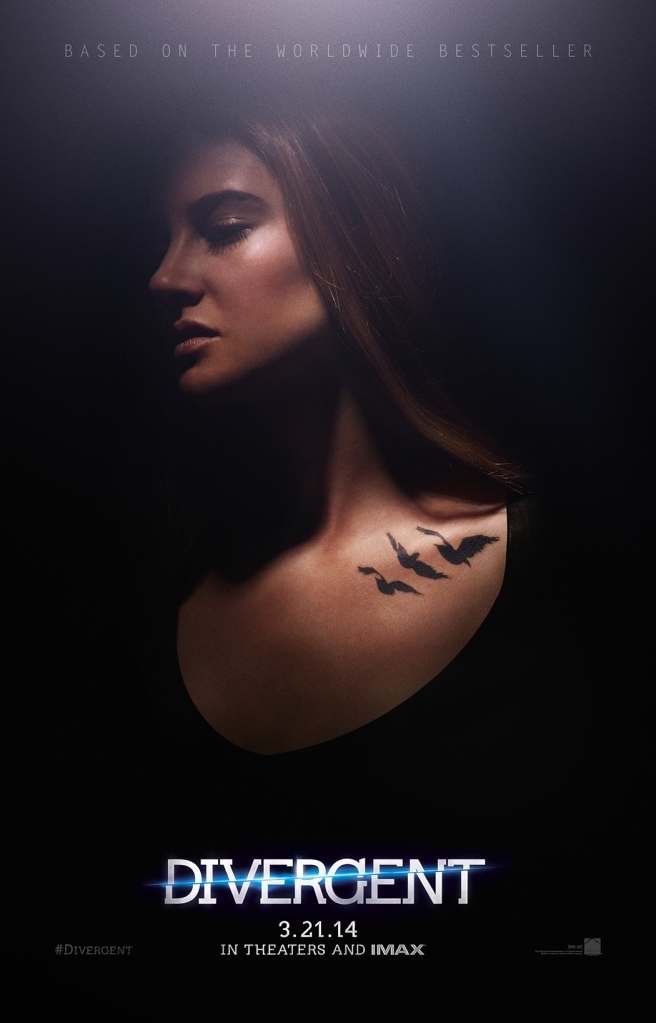 Society is segregated into different classes: Upper Class, Middle Class, and Lower Class (throw in the additional ones in-between), and everyone has a particular role that they play in keeping society moving, or unless you’re in the wings of the opposition – failing. In Divergent, the concept was interesting: 5 different societies that young people had to choose from based off a test (there goes Science again, trying to determine who we are as people), and the life you choose, based on your decision, is one that you’ll have to live with forever. Basically, it’s like when you’re asked at age 18, ‘what do you want to do with the rest of your life’, and you have to choose a career path – in order to find a particular placement for you in society (I’m not trying to sound like one of those conspiracy anarchists). The point of all of the choosing is to keep everyone governed so that peace can be maintained and no harm will be done. It’s to rid of the faults of human nature’s wrong doings. It doesn’t exactly sound like a world that’s ideal to live in, but for fiction’s sake, we’ll go with it.

There’s always someone who’s ‘different’, and society doesn’t like ‘different’, so what do they usually do with ‘different’ people? They either kill them or leave them exiled. Shailene Woodley (I came to know her in The Descendents) plays the role of Tris, and she represents essentially anyone who’s ever had an inkling of common sense to ask questions and not go against what‘s considered the ‘norm’. Her character can strongly be compared to Katniss Everdeen of Hunger Games, because it’s a strong woman who is essentially the catalyst of a resistance – standing up against ‘the man’ (I’m sure Joan of Arc was an inspiration behind them in their respective novels). Whereas Hunger has a stronger storyline, I still drew interest from Divergent because of the idea of society being broken up into 5 separate entities to work harmoniously into one, but the concept of ‘wiping out the different’ isn’t anything new; it’s like any X-Men movie you’ve seen with Humans vs. Mutants. Humans fear the ones they can’t control or understand, and this movie had a bit of that notion, although it just followed the path of a weak, confused young woman into a strong, and fearless leader. There’s a love interest, there’s defiance, and a bunch of surprises that seemingly came out of nowhere. I like how it was put together, and the story was easy to follow along. I don’t know how people who read the book reacted to it, and it’s still up in the air as to if and when I’ll read the trilogy, but what’s a for sure thing is that I’ll be keeping up with the movies. But for now, this is my opinion, this is my review

2 thoughts on “Divergent – The STiXXclusive Review”