I find that I’ve been reading novels a lot more because of the realities of the news that have just been so depressing that the imagination and imagery of literature has taken me away from it, even if it’s temporary. Gone Girl was one of those books that I was whisked away into a dark and tormented tale of a crazy ass couple (that’s the only politically correct way to put it) that was full of more twists and turns than a rollercoaster at Wonderland or Six Flags. This was a book that I was excited to read from start to finish, and I didn’t want to put it down. I haven’t been that excited to read a book since Girl With The Dragon Tattoo, and that movie turned out pretty damn good itself. When it comes to movies that are made from books (which seems to be about 90% of them), there’s always the skepticism that it won’t hold up to the standards of the pages and embrace that imagination and creativity. Well, if Harry Potter was the standard that many are forced to match in terms of ultimate book-to-movie success, people are paying attention. If you haven’t read the book, do that. Like, immediately, but this isn’t about the book, it’s about the movie. 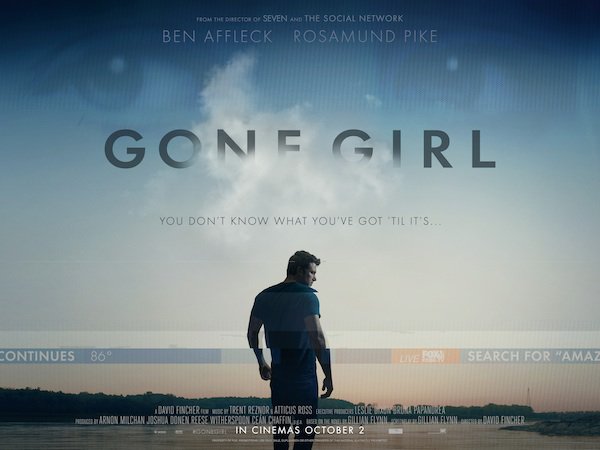 Marriage is something that a lot of people have a perception of being, and when it actually hits them, a lot of it changes (“that ring changes everything, man!”) and it can grow people together or push them away drastically far apart. Domestic abuse, the struggling economy, sex, infidelity, and doses upon doses of crazy were all evident in this movie, and I’m pretty sure there’s evidence of it in daily life – but not to the extreme that was presented. Nick Dunne & Amy Elliott Dunne look like the couple that everyone would want to be. They’re young, funny, ambitious, creative, and they just looked like that ‘America’s Sweetheart’ duo that people have fantasized about in TV shows over the years (Ross & Rachel, Cory & Topanga, Kim Possible & Ron Stoppable – whatever). But what people seem is nice on the outside is not always happy on the inside, which is very much the case since celebrities all over the place are marrying and divorcing every so often – not to look at celebs as role models, but simply examples. I know that ‘crazy’ is a derogatory term in many people’s eyes, but Amy Elliott Dunne is one crazy mama jama in more ways than one. Nick Dunne was the witty & naïve husband who did what wife said, and grew resentment for her controlling ways – usually the tightening of the wires get to the point of snapping, and then we have murder. Or so we think.

I won’t spoil anything, because that’s not my style, but what I loved about this movie besides the casting (including a surprisingly entertaining and normal Tyler Perry), plot, and storyline – it remained consistent with the book, and certain things from the book were switched around to accommodate to more realistic and present times (social media being the biggest one). The movie is entertaining (although I don’t recommend watching sex scenes with parents – there’s a bunch), and it’s raw about the realities of what goes on in regular households, although these people are pretty damn irregular. With a cast of this variety that would have (to most) sent more optimism into skepticism, it turned out really well, and I must say that it left me with the same ‘wtf face’ as the book did, and it was entertainingly exhilarating. I can understand why it was so hyped, and because of the success of the book, people may view it as ‘overhyped’, but believe me when I say that you don’t need to be Public Enemy. Believe the hype, because it’s real. If you haven’t read the book, the movie will tell you what you need to know, but I’d still recommend you do so. This is my opinion, this is my review