I specifically asked my guy Stixx if I could do a guest blog spot cause I needed to get this off my chest, and since I’ve done a guest spot on here before (if you haven’t, check out my ode to Michael Jordan), I knew this was the perfect spot. I couldn’t let this sit on my mind for another minute. It’s 6 in the fucking AM and I haven’t slept, but I need to say this. YMCMB needs to chill the ENTIRE fuck out. 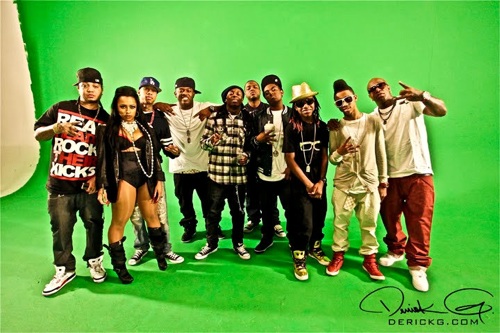 Now before I continue, I must clarify THIS IS NOT A SHOT AT THE ABILITIES AND TALENTS OF ANY MEMBER OF THE YMCMB CREW. I’m not trying to state for the 5,000th time how corny I think Wayne is, how badly Nicki has lost the streets, or have anyone misinterpret what I say about Drake as him being trash. This is simply an attack at the character, attitudes, and sensitivity shown by the Young Money Cash Money troupe over the past few months; especially with the way that they face criticism or with the way they fail to turn any negatives into a positive.

Wale is the rap equivalent to Chris Brown when it comes to facing criticism, but Young Money is like the Miami Heat, No one group of artists have collectively shown how hurt they can be at detractors than Lil Wayne and Co.: from Drake all the way down to Tyga’s horrible ass, no one in the crew seems to be able to take anything bad said about them with a grain of salt.

Wheelchair Jimmy is the worst of both worlds when it comes to this shit. Hot Wheels is pretty fucking horrible when it comes to facing criticism, nor can he mold it into a positive for anybody but his stans or for temporary morale. The man gets blasted by Common and Pusha T, jumps on stage in front of 10,000 screaming smuts and cries about not making music for men who don’t get pussy cause they don’t show their emotions, or whatever whiny bullshit that spews from his rectum. When people call Drake sweet, he and his fans take it as saying he’s trash.

When I hear that, I just hear people saying the shit Young Pillow Pet raps about is softer on the Johnson+Johnson radar than 2004 Kanye. Remember when Ye first stepped on the scene? He was called soft too, because instead of glorifying being a gangster or violence, he rapped about God, personal tragedy, family, clothes, girls, COLLEGE (soaks in to the screams of terror from the black community)….

Now granted, these are two rappers that talk about two different things; Drake spits about love and whatnot. But the thing is, Drake speaks a little too much about “that life,” that people begin to question whether you really are about “that life”. That is the core reason why people call him soft.

Like, my nigga, you’re a half-Jewish kid from Toronto, Ontario (no shade thrown at the country of Canada, I owe Stixx on this blog post). You rap, err, SING about being drunk and simp calling ex-bitches. You starred on a popular pre-teen drama. The most violence you probably ever saw was when Sean beat your ass in season 1 or when Rick shot you in the back and you tumbled a la Ricky in Boyz n The Hood.

Now, your father did live in Memphis, Tennessee, which is probably the best street cred I can give you. I wouldn’t even wanna stop in Memphis while on the Greyhound, let alone live there (yes, the nigga from the South Side of Chicago said this. Probably not as bad as here, but still somewhere I don’t wanna reside) so maybe in the times you visited your estranged pops, you saw some things. But other than that, you’re not a hard guy, nor do you come off or look as one. Dude, YOU HAD A CURLY FUCKING JEW FRO FOR ABOUT 3 YEARS! STOP IT 5! The reason most other rappers don’t get that criticism is because they stay in the lane of what they preach about. Kanye very rarely, if ever, raps about having to shoot a nigga. He knows he’s not about that life and is content with the stuff he raps about.

Drake, you are a great rapper, but don’t try to be somebody you’re not to fit the label you’re with and the people you associate with. Nor should you take a dick up the ass and whine when people call you soft. Don’t bring up your bank account, popularity, record sales, the pussy you cry to, blah blah to try to prove a point. It only proves the point that you are as sensitive as we thought you were. Fans can tell if you won’t pull the banger out on a nigga in real life. We aren’t that fickle. Well, some of us aren’t…

And before niggas get started with that “oh so you know them personally?” shit………shut the fuck up. Suck a dick. Choke on sperm in your windpipe. Die. In that order.

Off topic for a second, I fucking hate Justin Bieber. Ok, back to reason numero uno why I decided to guest blog on this – Lil Wayne and Nicki Minaj.

If you’re late as fuck, Nicki was supposed to do a set at Hot 97’s Summer Jam. Hot 97 DJ Peter Rosenberg said some shit before the show along the lines of “Fuck anybody that’s here for that ‘Starships’ shit. That’s not real hip hop.”

So, “The President” made the executive decision that YMCMB wasn’t gonna do Summer Jam, and he, Nicki, and the crew split.

Funk Master Flex did her set and took some shots at her. Nicki called in to Flex’s show the day after, made him look like a bitch, and complained for about 30+ minutes using complete nonsense as logic (making it a gender thing Nicki? C’mon now…)

Now Rosenberg is in the wrong for the timing of what he said. As a rep of the station, it’s not a smart thing to say some shit about an artists’ work right before they’re supposed to jump on the concert put on by your station. So it’s right for Nicki to be upset. Now, here’s where the Young Money crew is at complete fault.

Nicki stated that she was angry Rosenberg attacked her after all the years he liked her music and rapping and whatnot, also saying he’s taking shots at women – but he didn’t. He never attacked Nicki’s rapping or the classic shit that she’s done. He never attacked Nicki cause she has fallopian tubes. He never said Nicki wasn’t real hip-hop. He’s even said that he told Nicki one day that she would be the greatest female rapper of all time. What he attacked was “Starships.” One song. He said one song wasn’t real hip-hop, and it really isn’t. It’s a pop, top 40 blend of the recent EDM craze in America and whatever weird shit Nicki does. He stated an opinion on one song, but he never attacked you as an artist. Once you misconstrued those words, he didn’t have to give you an apology.

Nicki, you talk about how your fans (your “barbs”) were all watching that pre-show and were offended by what Rosenberg said. What you failed to realize is that out of a crowd of more than 80,000 that filled MetLife Stadium, a good portion of them paid good ass money to see you perform your horrendous ass poppy faux-hip hop bullshit. There’s a saying that goes “the show must go on.” So for your “barbies” in attendance, the least you could’ve done was do the show FOR THEM, send some shots Hot 97’s way at the show, take the money and run. I’d respect you somewhat for being smart and doing that.

I know it was Wayne’s decision, but he does not control you. You control you. As easily as he said to leave, you could have said you wanted to stay and do the show for your fans. While you did the show, you could’ve used that opportunistic time to take a right hook at Rosenberg and keep it real hip hop right there on the stage. You didn’t. Sadly your fans are stupid and they will stay and defend you no matter what, but that doesn’t make what you did right.

I promised myself I wouldn’t talk much about Wayne on this and I won’t, but I will touch on it a bit. It’s like Wayne is upset that people don’t view the men and women in his crew in as high regard as he does. He has shit to say when Drake gets dissed

Fuk pusha t and anybody that love em

He flips out and pulls Nicki from Summer Jam, a show he wasn’t scheduled to do a set, just guest appear; he acts like a crybaby bitch for being denied a seat at the Spurs/Thunder game and decided to switch-dickride teams (the reason I think the Spurs are now down 3-2, thanks Weezy).

Was going to go to the Thunder game tonight but was denied by the team to be in their arena. Wow. Smh. Go Spurs!

Take a chill pill my nigga. Learn to take constructive criticism and make yourself better & stronger. He’s not doing that. He just wants to complain: Complain about Pusha T and “everybody that love him,” complain about not seeing a playoff game and subsequently start to slob the knob of the other team. Life is too short to complain man. You used to be the best in the world before you got complacent as fuck with your raps, now you’re just another overrated, whack, egomaniacal emcee. You’re arguably the most popular rapper in the entire world next to Eminem. You’re taking criticism like LeBron James (Heat comparison comes into play here). When people bring up your faults or take a shot at you, you don’t react positively nor do you take any shots that will make you better publicly. You decide to act like a crybaby bitch. This is why you fell off. That’s why you probably won’t ever be on like you were again.

So let’s sum all this up in one paragraph, cause now its 7am, I’m tired as shit so I’m sure I lost myself at one point in writing this.

Instead of being the best crew in hip hop, or even trying to be, the core of YMCMB chooses to bitch, cry, and whine about every little thing. Is some of their music good? Yeah. Take Care was still a good ass album to me, Tha Carter IV had some playable tracks, and when Nicki actually chooses to rap, she goes hard. But they haven’t learned how to flip negative criticism into positive growth for their individual selves or for the label. They no longer care about the fans they’ve alienated. All that drives them are the physical/digital sales coming from the popular fans and the stans blinded by their love for them, unable to see the bullshit façade that oozes out of everything that they do. The money and the popularity drive them, not hip-hop. They’re not real hip-hop. I’ll never call them real hip-hop. Until they learn that not everybody is going to love you, and how to turn something from bad to good, they’ll never have my respect. They’re just a bunch of immature ass adults to me.

Follow me on Twitter, @ChicagoMadeSean. Check out my very first mix tape, St. Valentines Day Massacre. New music will be on the way soon so keep a look out for that. Most importantly, above all else, continue to love and support hip-hop.

9 thoughts on “YMCMB – The Great Complainers”