In 1992, I was 3 years old still living in Newmarket, and obviously I had no real recollection or memories, since I was still young to comprehend what was happening around me. There’s a reason why children born in the late 80s and early 90s wished that they were born in a different decade because they wanted to enjoy the music as young adults then as opposed to now. I mean, it’s true, the parties and the atmosphere must have been so sick because of the music, but that still doesn’t take away the fact that music hasn’t been as good; it’s just transitioned towards a different generation. And also, music is timeless, so no matter how old we are now, the music of the past can still be appreciated at any given time.

1992 is one of the more renowned parties that (before Friday night) hadn’t seen Toronto yet, and since it was so talked about because of just who has attended the party in the states, it was a big deal for a lot of people that it was hitting the city where people call ‘the party city’. Toronto does know how to party like any other city in North America, and that would be put on display for a multi-talented entrepreneur – Vashtie. I’ve seen her videos, heard her name in rap songs, and here she was going to party with the who’s who of Toronto music industry folks, and others just looking to have a good time (such as myself).

DJ Lissa Monet is a woman whom I’m glad that I’ve come to meet, because she’s a woman who has been non-stop working her ass off for as long as I’ve known her and then some. She’s also not bad as a DJ, and by ‘not bad’, she’s actually one of the best in the city of Toronto, man or woman. I walk into Tattoo, and I’m hit with nothing but 90s music. R&B and Hip-Hop alike, the vibe was pretty much set for the evening as the amount of people quickly filled up the room with recognizable faces and ‘big shots’ in the city (I say that with quotations, because there’s not really a lot of big shots, but they’re in that clique of higher importance). It felt like I was back in my parents’ adolescence with the gold rope chains, Air Jordans, Windbreaker suits, and Air Force ones around me. The vibe was intense, and this was well before Vashtie came through. There were 2 floors, and 4 DJs in total, but the party was just getting started. 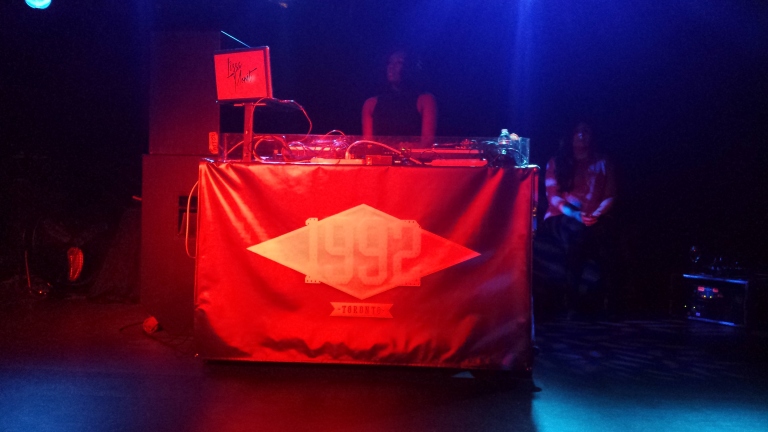 When Vashtie finally did grace the turntables, it was like a constant build up from the 80s/90s and a progressive walk through musical time in that time frame. You had people Diddy bopping, Wopping, Break-dancing (with whatever room was available), and head-nodding during a funky fresh set. She wasn’t on for long, but that didn’t dismiss the vibe that was circulating the area. I didn’t go, but I was hearing that Lissa was spinning something serious in the lower floor of Tattoo; had I known, I would have bounced and went down, but I wasn’t mad at all – I enjoyed myself.

It felt like an old school house party with what was being played and the energy was off the chain. There was a healthy blend of people all just there to enjoy themselves, and that’s how parties should be. There are too many instances where it’s just people standing up and holding a corner while sipping on their drinks, but I saw movement everywhere I looked (when I wasn’t dancing myself), so that was important for the city to enjoy. Vashtie may be a really popular person, but she wasn’t too good to take pictures with fans, and that was cool. Overall, if you weren’t at this party, I can only hope that you were remotely close to doing something better, because this was something to behold. A great night all around, and I’m sure it’ll be back in the future. Until next time,