It’s not often that there’s a movie that can come around and really mess with my head when it wasn’t expected, but that’s what this movie did. Not exactly to the levels of Inception or Shutter Island, but to a degree where it stood on its own to really have to stew it over in my head, and talk it out with another viewer (shout out to Britany). This movie, I had no expectations, because all I saw was a trailer and then it sparked my interest. Going into a movie blind without having an idea about plot is a good way to come out with an unabated opinion. When it comes to the oil business, right now, whichever side of the fence you’re on, it’s either great or terrible. In 1981 for New York City, it was damn near a war zone, amongst other things. I don’t know if this was based on a true story at all, but it definitely highlighted the struggle of the 80s from a business standpoint, and the individual psyches of those affected negatively. 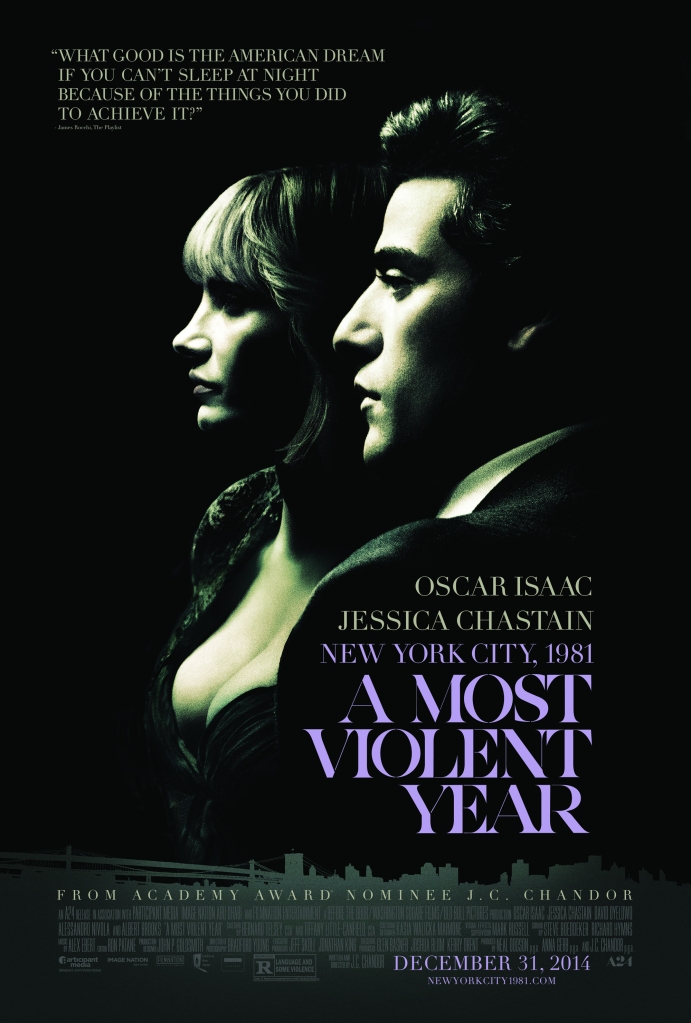 Oscar Isaac is an emerging actor in the game, and he’s poised to have a big year starting with the new Star Wars movie slated to release later on this year. In this movie, he plays a hotshot self-made oil man who has the dream-big vision for himself, but in a city where it’s historically the worst ever, being a straight-edged business owner can test your limits as to how you conduct your business. This movie presented a diverse cast, with David Oyelowo and Jessica Chastain being a couple of the recognizable names in the game as the puzzle piece of this movie slowly came to full fruition. What was suspenseful at times, it was slow to pick up, but it messed with your head as the sudden jolts of surprise kept you alert just to see what would happen next. It was entertaining, and thought provocative because so many things were happening at once, that when you went back to retrace the events and key shots & scenes, they made sense at the end as a whole that I can admit, didn’t recognize at the ending of the movie.

This movie taught me a lesson about being a business owner. No matter how much you have your own vision to do things the right way, there will always be people (some even in your own circle) that’ll have their own agendas to gain their own advantages at your expense. Also, it’s a generational thing (as it truly was in New York 30-50 years ago, that immigrants were the threats of the locals because they came in, they worked harder, and they were able to build themselves up quick. It’s like the competition had to teach a lesson to let it be known how it’s done ‘the American way’. It was a movie full of hidden messages, but portrayed the struggle through various ways that I feel some people will appreciate (depends what your patience level is like for slow-paced movies). It took me a while to discover if I really liked the movie, but through putting the pieces together to see how smart it really is, I’d recommend it. Be sure to catch it when it releases in theatres at the end of January. But for now, this is my opinion, this is my review

One thought on “A Most Violent Year – The STiXXclusive Review”