STiXX: One of the reasons why I love Hip Hop is because when you delve into the foundation and beginnings of it, it came from a place of struggle and where social issues were the forefront of making good music to express the frustrations of an oppressed people. But not all voices are as heard like others, and as much as Black Men are the frontrunners and main events to Hip Hop, Black Women are still important to keep the conversations going. Controversy is what breeds conversations to spark, and it’s good that there are certain (few) artists who can spark conversations of substance. In this instance, it’s about the often forgotten voice & face of Black Women and just where they stand in Black History: Past, Present, and Future. This is merely one example of that frustration that is shared amongst a collective that feel it isn’t right to just leave them out of something that they have had a part in building. This is also a study of art, as you’ll read, but the significance speaks volumes to what’s put out. I’m glad that I asked Shanice to write this piece, because of a prior conversation in which I was drawn to her passion of defending the merit of Black Women in this particular case. Read & enjoy.

Everyone knows Kendrick Lamar by now – one of the most influential and without a doubt, one of the best artists in this era of hip-hop. My love for him began back in 2011 with the release of Section 80, which is unarguably a classic. Since that release, he’d just been releasing amazing work from songs like Cartoons and Cereal, to his debut album, good kid, m.A.A.d city. This man failed to disappoint me. Now what I’ve learned a lot in the past is that, just because an artist is amazing at what he or she does, doesn’t always mean their personality equates.

One day as I was browsing Twitter as usual, I came across a new Kendrick interview; probably the first actual interview he’s had since his long hiatus. This was also around the same time Iggy Azalea was getting a lot of flak about her blatant disrespect to the hip-hop culture. It was to my disappointment when he basically encouraged her to continue making a mockery of the very thing he fought to become a part of. With that comment alone, my love for Kendrick started to diminish. Iggy was a manifestation of everything unholy within the hip-hop Holy Grail. I’m pretty sure a majority of Hip-hop heads everywhere were hurt when one of our idols actually respected and encouraged her, which is why when I heard his fairly new single (The Blacker The Berry) followed by the announcement of a new album being released this year, I felt as if he somewhat redeemed his Negro card – with that I couldn’t help but be excited. I was anticipating once again for what he had to offer musically.

Not too long after the initial announcement of the release of his album (To Pimp A Butterfly), a cover dropped. I had yet to see it but I heard it was just as controversial as ‘Berry’. Going through my timeline I saw a few women, black to be exact, outraged at the presentation of the cover. I took it upon myself to see what exactly the commotion was about. There it was, one of the best covers to greatly depict the black rebellion. 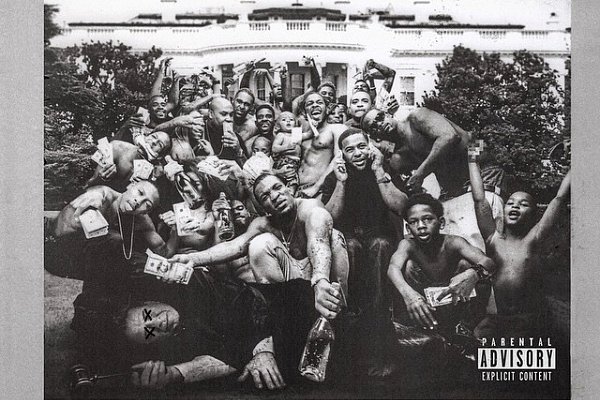 The most ‘straight out of Compton’ looking set of black men pictured in front of the white house with a white judge depicted dead at their knees. Black men from old to young, shoving it in the ‘’mans’’ face, made it what has to be the most powerful album cover I have come across in a while. As I continued to study the cover, I understood what the multiple black women were upset about – in all its glory of black anarchy there were only black men that were chosen to represent this powerful message. I myself was not in complete disarray. I had not been expecting a black woman to even be included. From music videos to even song lyrics, black women never seemed to be highly favored or even represented, that I have sadly become accustomed to but I could understand their outrage and frustration, and here’s why.

Black women themselves have been given the world’s short end of the stick, from telling darker toned women of colour they’re ugly and also seeing some of their own men blatantly ignore their existence, whom has ventured in every single race, but not even give a second glance at their own race of women. This on its own accord is damaging to some women’s psyche. Imagine a genre that was made by women and men that look like you, turn around and condemn you. It can be disheartening.

If you haven’t been living under a rock, you also know of the unfortunate murder of the unarmed black teen Michael Brown, as well as other racially motivated hate crimes against young black men/children. Black bodies have always been vilified by White America regardless. Black bodies meaning both men and women have been torn down, murdered and hated by the system. Excluding women from this cover can be viewed as erasure of the struggle they face as well. Not to also mention that black women have been the face of the majority of the protests, we also organized, supported and have been fighting for black men’s’ lives without any resistance.

In reality, it may just be another album cover; maybe we are looking too deep into this. Kendrick may have just wanted to prove another point by using the most hood looking black men to represent his message, but before you go out of your way to ignore or attack black women’s outrage, look at it from their perspective. Are they genuinely represented enough throughout anything related to blackness? Are they genuinely respected entirely by our black men? Is it fair to silence their struggles by not representing them within something they also face? A picture of a multitude of black men over powering the government that works so profusely to tear them down is an extremely powerful message, so why isn’t it ‘’that serious’’ when black women are outraged of not being included in this moment of revolution? Think about it. As I digress, it just seems incredibly insulting to make a song praising blackness, but not include everyone within this empowerment and appreciation of blackness. Kendrick, you may just be the biggest hypocrite of 2015.