The season is upon us for the most exciting movies, and that season is summer. It’s evident in the city of Toronto, where they’re filming the highly anticipated Suicide Squad, and that has put the excitement in the movie world for 2016 on top of what’s already to be slated for release. But this summer, there was another movie that was getting a majority of the hype for this year, and that would be from the infamous Mad Max series. Now, I’m not as big of an action buff, so I didn’t see any of the predecessors before watching Fury Road. The most I’ve seen of ‘Max’ was from the ‘California Love’ video with Tupac & Dr. Dre. That was about 20 years ago, so you understand that it’s been a while. With Tom Hardy being pretty much a Hollywood superstar for his various portrayals (most recently, Bane from Dark Knight Rises), and Charlize Theron just being Charlize Theron, the hype over this movie was clearly justified. Through the wise words of my mother, summer movies are about “shit blowing up”, and quite frankly this movie did a lot of that, and then some. 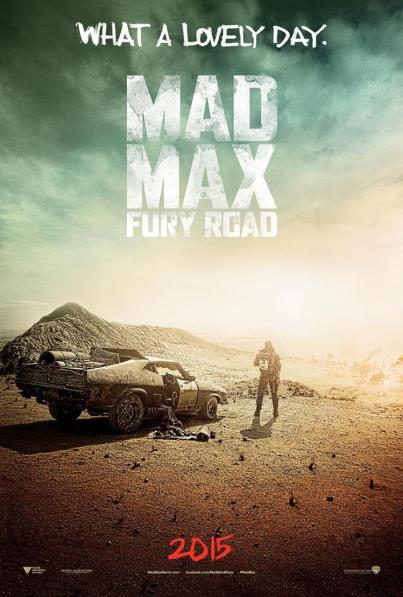 I believe it was one Russell Crowe in Gladiator who famously asked, “are you not entertained?” and we, the people, said ‘yes, Mr. Crowe, we are entertained.” The story is pretty cut & dry, plain & simple (obviously I won’t spoil it). It’s the end of the world and in a post-Apocalyptic world (which funny enough doesn’t involve aliens for once); the objective is quite simply – survival. In terms of the entertainment that comes with said survival tactics, it provides all of that and then some. You’re not going to get a lot of strong dialogue and a great sense of character development with multiple sub stories to bob & weave its way throughout the movie, but there is a plot, it makes sense, and the action to dialogue ratio is about 4:1, so you won’t be heavily worried about having moments where it’s just dull. This movie really doesn’t allow you to chill out and ease its way through. It keeps you on your toes from the start.

There’s nothing more that needs to be said if you’re looking for quality entertainment, you need to see this movie. As to if it lived up to the classic series, I can’t answer that without knowledge, but I enjoyed it. I’m sure you will too. But for now, this is my opinion, this is my review