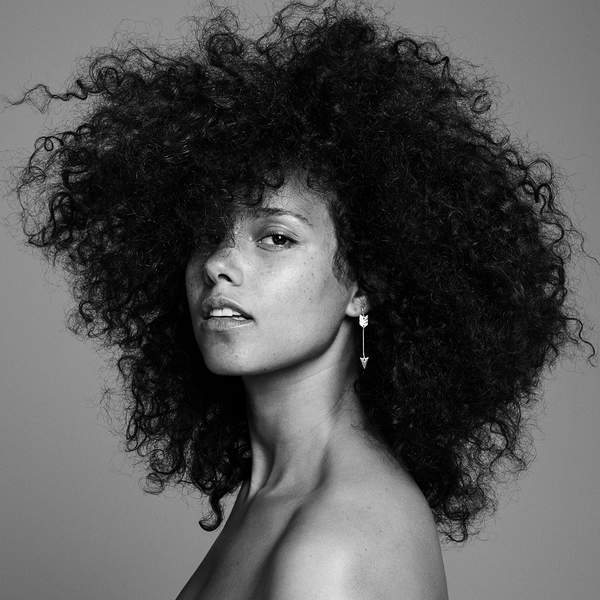 Alicia Keys has brought about a bunch of controversy in what you would imagine to be the least controversial way that you could imagine. She began living a ‘makeup-free’ lifestyle (that turned out to be somewhat of a technicality due to the fact there was still some used) and for some reason, that upset a bunch of women who felt like it was a shot to them saying that they were better off without (which women have been told by men for as long as they can remember). I didn’t think that it was something that was meant to say that women all over should just ditch the products they love so much, but I think it was more of an affirming statement that embodies the female empowerment that Alicia strives to push within her humanitarian rights, as well as within her music. I’ve always seen her to be an individual who really had a good sense of awareness to understand who she was and who she wanted to represent for, but because of the whole Swizz Beatz-Mashonda love fiesta, many people labeled her as a home wrecker, and there are plenty of people who still won’t let that go, to which I say, letitgo – all one word.

As for the music she made since Element of Freedom, I can’t say that there’s been any real excitement from my end, and it took a dear friend of mine & avid Alicia Keys fan, not ‘stan’ (shoutout to Britany) to give me a different perspective of her music, how some albums have aged better with time. That led me to revisiting As I Am and having a newer appreciation for it. But with Freedom, and then the follow up Girl On Fire setting my expectations back (although I was jamming to This Bed recently), I was wondering if Alicia had just gone the way of a lot of great artists and just tapered off, while still clinging onto the greatness that was the albums that we fell in love with. I’m sure that was the case, because many people outside of just the diehard fans, started to not care about her, and her TV & film appearances slowly got more into the routine habit. That’s where Here is such a pleasant surprise, because I didn’t think that this resurgence of Alicia would have sprung about where you had hints of nostalgia present. I certainly didn’t anticipate willingly listening to the album out of anticipation, especially after hearing In Common (insert *Prince blank stare gif here*). Because of that song, I didn’t think that I’d get to this point where I’m writing about the album in full, no bullshit. But ‘here’ I am (badum tss).

There was a lot in this album that surprised me, and it came to be when I previewed half of it in iTunes and then went on to make the purchase, because why not? The Beginning with her signature piano crescendo that builds into the album in a way that spoke to Songs In A Minor. The Gospel right off the top got Alicia into a mode where she was spewing out facts about family in her life that we hadn’t heard about, and was likely to set up the theme that this isn’t just another album, but it’s really one with a focus and concrete meaning. Alicia Keys with the half head of hair braided and Hell’s Kitchen accent seemed to have resurfaced, and I couldn’t have been happier.

Ghetto university, knowledge is all it took
In a tenement I was listenin’ to the hook
Change gon’ come, the spirit of Sam Cooke
When the feds comin’, everybody be shook

There’s a healthy blend of New York boom bap influence along with R&B elements that make it an Alicia Keys staple. She doesn’t drift far from each sound, but within every song, there’s conviction and purpose with every lyric and hook that comes to be. Pawn It All talks about the importance of sacrificing things to find your personal freedom, especially if you’ve gone through plenty of turmoil through life events, which many people can relate to. Just like her album couple suggests, this is a bare-all telltale of Alicia’s innermost thoughts and expressing subjects that she otherwise wouldn’t have touched in the earlier portions of her career, but not to use the commonly used buzzword here, but it’s really her in an unapologetic state of mind. It’s much more explicit, and truly she doesn’t give a fuck. She’s a mother, wife, and truly in a form where she’s just let a lot of shit go, and that’s great.

It’s funny that this album came out after my brief trip to New York, because if I had plugged this in and walked around Manhattan, I would have had a more lively experience with it. Even being on the ‘A’ train a few times, and hearing the operator make the announcement at the end of Kill Your Mama (great song about how humans are disrespectful to Mother Earth), I was like “hey, I was there,” and I feel like she really put herself back to where she felt the most comfortable to make this project.

The interludes also play a part in shaping the sound and style of the album to have that authentic New York feel, which a lot of people would say is a stuck-in-the-90s mentality, but skits, whereas most of them are thought to be entertaining, they also provide an inside perspective to just everyday conversation, to talking shit, and also little nuggets of wisdom that you wouldn’t hear over a beat (just don’t over do them – looking at you Tory Lanez). From the Elaine Brown poem, to Nas talking about personal growth on Elevate coming out of the latter half of She Don’t Really Care_1 Luv which samples his One Love; to Cocoa Butter talking about the insecurities that women have which flushes up against Girl Can’t Be Herself, the interludes work in ways to string the album a long where you’re not caught off guard, but where you’re pulled into different scenes as they play out like a short film.

Not only is this an album that has songs that speak to Alicia Keys’ a’woke’ening, but it’s a piece of work that celebrates Blackness, challenges stigmas, and definitely has empowering messages for women of all ages, most specifically, Black women. Alicia is also someone who thinks of humanity in a Global way in which we are all citizens, but doesn’t do it in a way where it belittles a group here or just throws it in your face like a hippie from the 70s in a save-the-planet fuss. We know the world is in bad shape, and quite frankly we don’t always need a reminder of it. We do what we can, but we still have to live in it while we’re here. The song that brought about the most conversation is definitely Blended Family because of the situation where you have Alicia coming into Swizz’s life where he already had an established family, and although there was a lot of flack in the beginning, there’s a reassurance that the family is still a solid unit, which is cool, because the other 80% of situations like that (I made up a number, sue me) definitely don’t have a song attached to it that praise the situation. Kids are definitely the ones who are the most affected, so it’s understandable why Alicia would make this song, and A$AP Rocky’s verse sharing his perspective as a child of that, certainly gave it a more complete thought.

I didn’t expect to like this album, because I came in with lowered expectations, and I still considered myself a fan of Alicia’s even after the last 2 albums didn’t hit all the way home. But as most fans do with their faves, you hold onto the fact that their old albums (Songs In A Minor & Diary in this case) give you hope that there’s still something there that can spawn that feel good music to return. Over some time, I can see this album getting its just appreciation. Welcome back, Alicia, glad to have you here. But for now, this is my opinion, this is my review