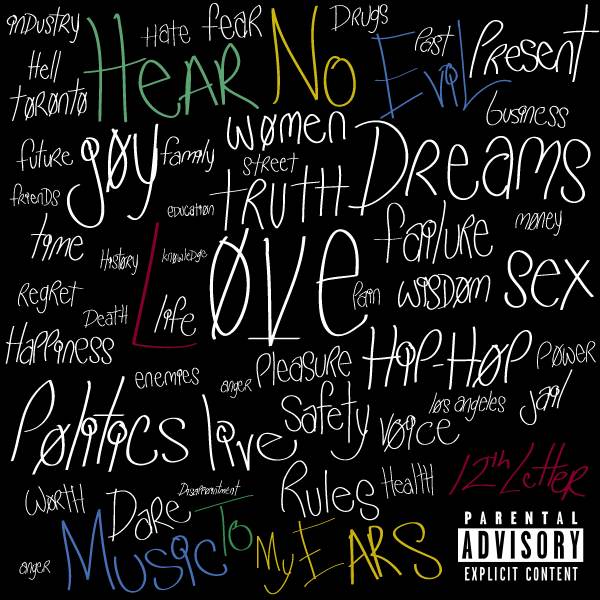 Now, I know what you’re thinking, “wait, he’s biting The 6th Letter?” I won’t lie, I found it to be a weird ass coincidence that he has a similar name, but to be fair, he used to go by ‘L the 12th Letter’ if that’s any consolidation for you. Besides, it’s more than just a name; it’s about the artist making the music with the name that matters, that’s what’s here to be talked about. I was forwarded this guy’s music from a major hip hop head (much more respectable knowledge than myself), Matthew Taylor. I trust people who have a thorough knowledge of hip hop, and considering that he’s one that’s considerably one with the business side of the industry, he’s one to trust – so I did.

12th is from Toronto, and judging by his voice/face, he doesn’t look to be that old – probably in his late teens/early twenties. Again, the youth of Toronto is sprouting. The first video i watched is a song from his debut album Hear No Evil |Music To My Ear (Stream below), entitled ‘OWTH’ (or Off With Their Heads).

The song showed off that he has some aggression and can pack a lyrical punch, but I wasn’t completely sold. His album is where my ears were captivated more. The album is solid – no doubt about it. There’s a story behind it, it’s smooth from start to finish; it has a nice balance of sound all around that mixed in different styles and made it fresh. He has some skills, there’s no doubt about that, and given that he puts in his fair share of work, he’ll be a name that the Hip Hop collective of Toronto will be familiar with. Just another name to add to list of whom to check out. Check out the album, and the rest of his music on Soundcloud & Bandcamp. Enjoy.