When it comes to Action Bronson, I can only admit that he’s one of the most consistent new rappers who sounds like an older rapper. One of the very first lines I ever heard him rap was “don’t ever say my shit sounds like Ghost(face Killah)’s shit”, as he made it known that he was standing on his own two as an MC out of Flushing, Queens, New York (which he will proudly correct you on). He’s an entertaining rapper not only for his wild lyrical content, but also because of the way he interacts with people on social media (Twitter, to be more specific). Blue Chips (the first one), was the first mixtape I’d listen to when people were talking about who were really good MCs, and I immediately heard wordplay a harsh flow, and for people who are fans of rappers who remind them of the Golden Era (See – Joey Badass), there was definitely light to shine on Action Bronson. 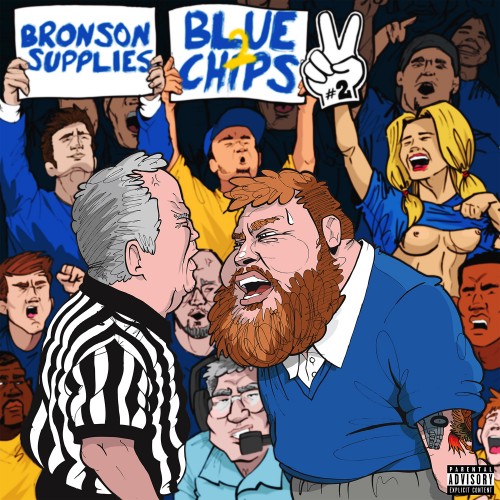 Blue Chips 2 was very much anticipated because of the success that Bronson was having with his budding career and other projects (Rare Chandeliers is still great). Given the fact that the first one was so good, you could only imagine what he’d be able to come up with. When I attended the 2 High 2 Die tour with Action & Danny Brown, he premiered two tracks from there where he was rapping over classic songs – I mean like songs you wouldn’t think a rapper could rap over, but that was the emphasis of the album (it’s also free, in case you didn’t know). Big Body Bes having an appearance on any of Action Bronson’s projects creates a great atmosphere of comedic relief because he talks the most shit and it’s just so out of hand that you have to laugh.

“The first thing you do when you meet me – you should apologize to me. Because you’re nothing like me”

Pepe Lopez was one of the songs that Action had debuted in Toronto, and I found it really cool that he rapped over a sample of the classic song Tequila by The Champs. With his wordplay being mainly about the lifestyle in Queens, food, materialistic & pop culture references all throughout the album, it’s consistency that you’re getting once again over a variety of beats that range from different time periods. Every producer that Action Bronson has worked with on his projects as of recent, they’ve been gems – no denying that.

His love of using sound bites throughout his projects continued, as he had a Spanish commercial, an Applebee’s commercial featuring Bobby Knight and Digger Phelps, and my personal favourite; the classic Allen Iverson rant, which he ironically used on a song called Practice. The song featured a sample of the Late, Great Issac Hayes’ Do Your Thing (I’ve been listening to the song for years, so I definitely caught it right off the bat). He always asserts himself as one of the best rappers, but he never really boasts about his status as a great rapper – he just has fun with making tracks, and it’s evident each and every time you listen to one of his tapes or albums.

Features were definitely a standout on the album as well. Jackson & Travolta paid homage to Samuel L. Jackson & John Travolta (acted with each other in Pulp Fiction), and Bronson & Mayhem Lauren (who kind of sounds like Sean Price) knocked out a pretty dope track together. Twin Peugots reunited Mac Miller & Bronson from their previous collab on Mac’s album (Red Dot Music – one of the best on Watching Movies With The Sound Off). Mac Miller killed his verse with a dope ass flow and great bars. For someone who normally hates his music, he really had a coming out party this year. Through The Eyes of a G welcomed in Ab-Soul who’s also been prepping for what looks to be a good 2014 campaign for him. He shined through his usual lyricism over a sample of Tha Pharcyde’s Passing Me By (sampled by Joe for Stutter, which Ab paid homage to at the end).

Contemporary Man reminded me of Randy The Musical on Rare Chandeliers when Action rapped over multiple beats on the same track. It was that same style, and I’m wondering if people would have caught that connection. There were elements that he carried over from the first Blue Chips, so that was something that fans could look forward to when listening to the sequel. Personally, I liked the beats better on the first one (Ron Simmons though? Come on – hard to top that and Pouches of Tuna). The sequel of 9-24-11 (aptly named 9.24.13) was pretty dope and it was probably one of the only tracks that had a consistent theme with it, but I thought Big Body didn’t need to be on it. Amadu Diablo was the 2nd song he premiered in Toronto and what adds to his greatness is how he can pretty much rap over anything, even songs that aren’t meant to be rapped over – some people would look at it as ‘defiling a great song’, but this is Hip Hop – there are no rules.

As I stated beforehand, I liked this album, but I liked the first one more. With Action Bronson, there really isn’t anything he does that’s disappointing (although I found SAAAB Stories to be underwhelming) so when it finally comes of time for him to drop a full album that I can actually purchase in a store, I’m just it’ll be worthwhile. If you haven’t had the chance to get into Action Bronson, word of advice – have a sense of humour and don’t take everything literal with him – he’s a joker and it benefits him with his lyrical delivery. He’s a rapper but also an entertainer (as I’ve said before), so keep that in mind. Give the album a listen, and check out the rest of his stuff while you’re at it, if you haven’t. This is my opinion, this is my review