Nipsey Hussle may not have made it on your radar because of his music, but throughout the internet and the industry, he made a lot of headlines by creating the first ever $100 mixtape or album, and it’s just one – not including any packages or merchandise. What was the premise of such thing? “F*ck the Middleman” was the message behind it, and if you’ve been listening to Nipsey with his earlier work (like before The Marathon series), you had a feeling that this was coming because he always proclaimed himself to be (no pun) a hustler, and that he would make the industry become more respectful of him and the independent movement. And given that the independents have been more of a force in Hip Hop as of late (Macklemore, Mac Miller, Tech N9ne being your examples), why not use your independent fanbase to your advantage. Introducing the ‘Proud 2 Pay’ movement was probably the most insane idea I’d ever heard of, because I thought he was nuts to think that he would sell even 100 copies of an $100 mixtape. But, when it comes to the power of fans, when you put out a quality product, they will buy. If fans are supporting their favourite artists, they will pay whatever amounts of money just for their product. Supply and Demand isn’t something that’s hard to interpret; when the people want something, they’ll take advantage of the supply. 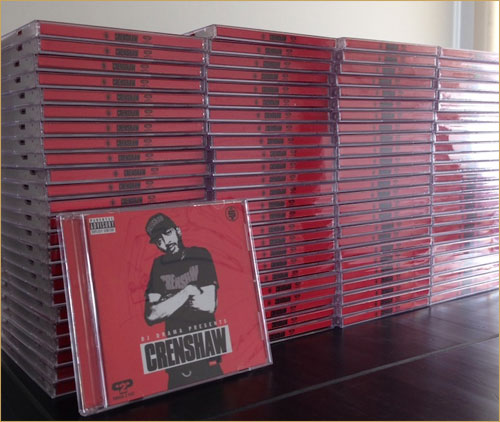 I was growing impatient with  Nipsey because of the long delay of the final installment of the Marathon series, Victory Lap. When he announced that Crenshaw was going to be the mixtape and VL would be the album, I didn’t know what to anticipate anymore. Having being from Slauson, I didn’t know what the connection with Crenshaw was (I’m not from California, but I don’t think it takes rocket science to determine streets). In the opening, the clip from Boyz N Tha Hood where the cop is confronting Trey asking “what set he’s from”, it provided a moment of nostalgia, and also provided the setting for the tape – all West everything as per usual with Nipsey, although he didn’t have that ‘traditional’ West sound like in the Bullets Aint Got No Name series. What would we be in store for? I have no idea, but as I was listening to it from Checc Me Out with Dom Kennedy (who I absolute can’t stand), All Get Right, 4 In the Morning, and others – the production was the consistency that was made it enjoyable to listen to throughout. Nipsey likes to emphasize luxury, struggle, and come up like he hasn’t been telling the same story throughout. It gets repetitive, I can’t even like. The only difference is that the beat changes, but the production has amped up as the projects have moved up. It’s full of music that you can lay back and chill out to; that’s his lane, because he’s not going to throw around amazing bars to fascinate real ‘hip hop heads’. All Money In has been the motto, so to see how it has grown to create the ‘Proud 2 Pay’ movement, it’s a tribute to the work that Nipsey has put in as both an artist and a man of business. Clearly he’s in the game for more than just making some money, but also having an impact on the game at the same time.

The features on this mixtape also played a part in boosting the value of this mixtape. Don’t Take Days Off had some good ones coming from the likes of fellow Cali rapper, Dubb; James Fauntleroy adding his touch to a couple of tracks, and even a collective of Southern influence on Go Long (Z-Ro and Slim Thug being the providers). There were a couple of tracks that came out prior to the announcement of the mixtape (Face The World produced by 9th Wonder, and Blessings produced by 1500 or Nothin & The Futuristics) and they’re a couple of songs that actually added substance to the mixtape that wasn’t all about the fruits of his labour.

He’s no stranger to run-ins with the law, and he’s honest about his stories, which has made him a rapper to embrace, because with authenticity in rhymes being such an issue as of late to determine just who is ’bout that life’, Nipsey has constantly made it his purpose to prove those wrong and make people believe that he is truly a product of the streets.

Bless us with the gift of real loyalty
You know the type, he facin’ life you pay the lawyer fee
Bless us with abundance let us ball hard
Protect us when they threaten us with a false charge
Bless us lord cause niggas with the extras Lord
Help me let the way to what I made steer my direction more

I live for substance when it comes to rap, and Nipsey provided a necessary balance to accommodate the smooth vibes from other tracks (Summertime In That Cutlass being one of them). The little inserts of  90s music like Keith Sweat & Aaliyah also contributed to the production value, and really you started to question yourself like ‘maybe this is worth my $100. I mean, it”s just $100.’ But then again, not everyone has $100 to blow just like that…and yet many pay more for less. What Nipsey was able to take advantage of with this project was that if he put out a quality project, the response of just who buys it would answer all doubters (including me) – and it did. I could have done without the annoyance of DJ Drama, but for anyone who’s looking for some real deal West Coast flavour that’s laid back, but at the same time street emphasized, this is a dope project. I credit a lot of my likeliness for it to the production, because there were a lot of gems to be appreciated along with the other examples I provided. But for now, this is my opinion, this is (a different look of) my review