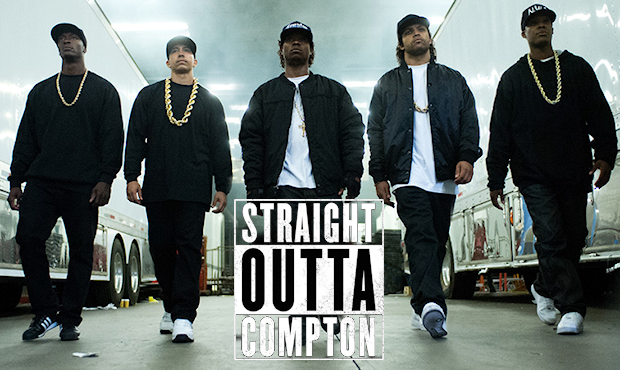 Rap music as we know and love today wouldn’t have been possible without the efforts of many artists to come before them to endure the hardships of making Rap become welcome and accepted into society as art (there are still those today who don’t feel as though it is). Rap is looked at as poetic, misogynistic, homophobic, transparent, intellectual, wise, and just about every adjective in the dictionary from extreme opposites of the spectrum, whether they’re positive or negative. The truth is that, whether for entertainment or self-expression, Rap is a necessary outlet that many Black youth turn to as a means to make something out of their lives when the opportunities either aren’t there or simply limited. The unfortunate circumstances of one’s living environment serves as the inspiration to make something happen, and for a group of men from Compton who just wanted to make music for their neighbourhoods, they came out to be bigger than they (and the rest of the world) expected. In this biopic, this would be (for many) a glimpse into the beginning of the notorious Niggaz With Attitudes and how they changed the landscape of Rap music from a troubled inner city suburb called Compton, California.

When I saw the announcement on by F. Gary Gray (the director of this film and other Black classics like Friday & Set It Off) that he would be directing this biopic, I was really excited because although I’m a generation removed from the NWA experience, I did listen to them growing up (not a whole lot, because Wu Tang had more East coast influence). With two of the surviving members, Ice Cube & Dr. Dre, having the most post-NWA success, the legacy of NWA always lived on for the next generations to come. The Chronic & 2001 were soundtracks for many summers, and Ice Cube’s film presence was widely noted with his signature scowl. It was going to be interesting to see how his son, O’Shea Jackson Jr. would take up portraying the role of his father during his heyday. The come up of just forming an organic idea, to making records, to dealing with shady business deals all the while being a Black man in America (the LAPD being the main aggressors, at that), you could see how the genesis of NWA was largely influenced by the negative environment, especially in the late 80s & early 90s.

What the movie trailer didn’t show (thankfully) was just how detailed their personal relationships were, although it was the business that did break apart the group early, hence why although technically NWA has 2 albums, they only have 1 together as a whole – including Ice Cube. I’m not a Rap historian, so I’m sure there will be people out there who felt as though a lot was left out, but believe when I say that this movie is pretty long, so I’m sure they put in as much as they could. As much as the group is the main focus of the movie, the primary focuses as the movie goes, turned to Eazy E & Dr. Dre, as they were the reason why everything started up. Dr. Dre is a visionary, and because he was so, that led to creating Death Row (these are not spoilers, this is real life), and eventually the label we know today as Aftermath.

I liked this movie a lot because it’s gripping from the very beginning and honestly, there hasn’t been a movie that had the same Boyz N Tha Hood or Menace II Society impact that Straight Outta Compton might possibly have in the years coming. Also, in a time where the ‘Black Lives Matter’ movement is strong because of the ongoing police brutality against unarmed Black men, women, and children, it was important that they highlighted it, but much like what goes on 20+ years since their inception, it’s the same result, which is sad. I’m thankful for this movie because although it entertains, it educates on the importance of NWA and how they took ‘reality rap’ to a level that thousands of artists are benefitting from today. One piece of lyrics that come to mind is from Watts, California’s own, Jay Rock of TDE who said on Imagine:

“Matter fact, imagine if we didn’t really start this gangster shit
Y’all wouldn’t have nothin’ to spit
No drive bys, no flags stickin’ out pockets
No NWA dudes, just rappin like Cre Cru”

This movie was well directed, edited, and obviously the music would be great as Dr. Dre smartly implanted music from Compton: The Soundtrack to serve as such, and also you have NWA, Dr. Dre, and Ice Cube songs to fill out what is a great vibe from start to finish with spots of emotional heartache It’s quite the ride, and for NWA to have such a timeless legacy out of starting from essentially nothing, this serves as extra motivation going forward for a lot of younger kids, and great nostalgia for those who lived through those times when they were my age or younger. I’d definitely watch this movie again with no hesitation, I found it to be that good, but at the same time this is my opinion, this is my review, and for now

One thought on “Straight Outta Compton – The STiXXclusive Review”