“Who is K. Dot? A young nigga from Compton on the curb writing raps next to a gun shot” 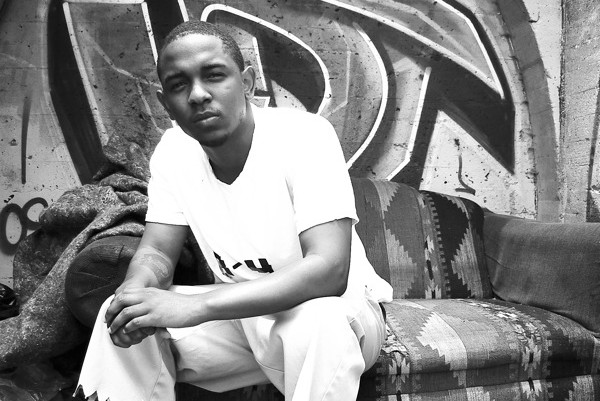 I first came across Kendrick Lamar when I looked at the 2011 XXL Freshmen List. I didn’t think much of him when I downloaded the XXL ’11 mixtape, because I couldn’t get past his voice at all. It was really froggy, and it sounded like the man had a permanent stuffy nose. That was my issue. But, last May after watching Big K.R.I.T in concert with fellow twitterfolk @NonChallantt & @shawnteezus, they were talking about Kendrick Lamar coming to town for a concert. I sought out interest, so I tried to listen to him again, and lo and behold, I discovered just how much of a great rapper he really is. The first video I watched from him was ‘Michael Jordan’ (coincidentally, if you read my ScHoolboy Q post, that was the first time I heard him as well). The beat was hot, and his flow was like that Based God swag rap, so I was like, alright this is a hype song. Afterwards, I heard ‘HiiiPoWeR’ and this was before Section.80 was to be released, but that one song made me a fan, simply because of the wordplay, the content, the aggressive delivery and poetry that he vividly displayed on the song (produced by J. Cole in case you didn’t know).

So, then FINALLY, I downloaded O.verly D.edicated and my mind was blown. From start to finish, I was amazed his rap skills. The content of his rhymes stretched from growing up in Compton, to dealing with issues that a lot of people my age (he’s 23 by the way) can relate to. For example, in one of my favourite songs ‘Cut You Off’, he talks about the cancers in his life that he has to cut off in order to move ahead as a person and grow up as an adult. I mean, it’s the simplicity of that on its own that made me a fan. Even ‘Growing Apart’ and how it’s structured that it talks about a relationship, writing a song, and expressing his thoughts on his process as an artist, and at the end of it promoting that we stay ambitious. The thought process of Kendrick is wise beyond his years, you would think that he’s a 30 something year old with a ton of life experiences, but then again when you live in Compton, I’m sure you would see a lot of things that would make you think about life outside of your own. He doesn’t claim any gang affiliation at all, so his neutral perspective makes him a great ambassador for the New West Coast style, very polarizing from what we grew up thinking of the west coast with Ice Cube, Snoop Dogg, Dr. Dre and a cast of others.

It’s funny how I downloaded his more recent mixtape (at that time), before I downloaded his older stuff (The Kendrick Lamar EP & C4), but throw listening to the older stuff and progressing towards the new, you can see his transition into a more diverse rhyme scheme and a vast improvement in flow and versatility. He’s quite the gifted individual.

When I had the opportunity to finally watch him in concert, what I witnessed that night was a man who was a very humbled individual, deeply passionate about who he is, where he comes from, and what he represents, not only for hip hop or the west coast, but for a future generation of kids who will most likely grow up listening to his music. He’s still somewhat underground, because at the time of the concert, there were still a lot of people who didn’t know about him, but his energy rubbed off on a lot of people, and the way that he’s just so laid back and cool, makes him not only one of my favourite artists, but a very interesting individual to follow-up on, simply because he’s a chillin dude, but intelligent at that.

I can honestly say that in 2011, there was not one song, or feature that I heard from Kendrick. He arguably had the best verse on someone else’s track with The Game in ‘The City’. Section.80 was arguably the best album of any genre to come out last year. You can fight me if you’d like to, but it’s simply facts. I bought it as soon as it came out; went to Future Shop, bought an iTunes card, came back home, bought it, and played it over and over again. Not one flaw. NOT. ONE! It’s worth every penny, every dollar, every liable tax that is thrown out to you. Best purchase I made (musically) of last year. And his major label debut album next year Good Kid in a Mad City, I expect nothing but greatness. I’m also awaiting that collaboration mixtape with J Cole as well (if that’s ever to be released).

Now, there’s a lot of people who seem to think that people overrate Kendrick simply because that he is a great rapper, but many see him as boring because he doesn’t rap about anything worthy to them, but he’s good for the industry because of the mentality that he brings, and the background that he comes from, he’s a beacon of light for an area that is used to seeing dark clouds. I have a lot of hope for this young man, and I hope nothing for great music projects coming out in the near future. Download his music, that I’ve posted, and enjoy it, also take in the individual songs here as well:

Look Out For Detox

Buried Alive (it’s on Take Care, but you have to suffer through Marvin’s Room to get to it)